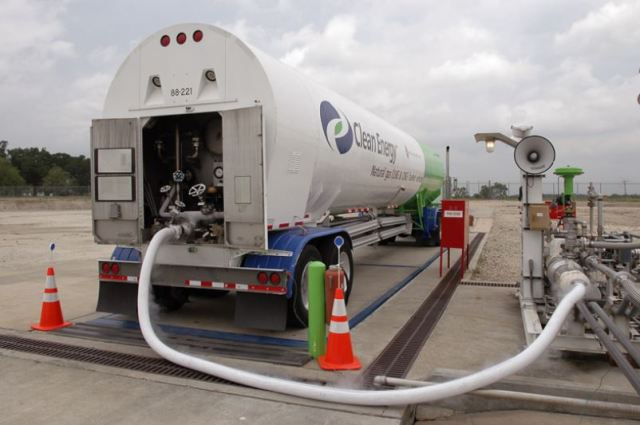 I didn’t know much about LNG until I started completing Sandra Steingraber’s Return of the  30 Days: Infrastructure comments. After all, those LNG trucks look so innocuous – all nice and white with Clean Energy blazoned across their sides. However, as I have warned before, beware of things that are white and clean and have to do with fossil fuels. There are no clean fossil fuels.

Here is what Steingraber tells us about LNG.

1. LNG is made by chilling it to minus 259 degrees Fahrenheit to reduce its volume. At that temperature it is boiling hot and deadly.

2. LNG leaks from the tanks, from the pipes, from the trucks. It also has to be vented regularly which releases methane and other pollutants into the air making it as dirty as coal. Last month 7500 song birds were killed when they flew over a LNG facility. San Diego’s smog is heavily impacted by LNG imports.

3. LNG doesn’t burn when exposed to a flame, but it does explode all on its own. When it leaks, it has no smell to warn you. It forms a whitish cloud that when there is enough of it explodes. In 1973 an explosion in an “empty LNG gas tank” killed 40 workers in Staten Island.

4. Transporting and storing LNG is a complex process. The trucks and facilities have to be kept cold (minus 259 degrees) A leak can freeze skin and lungs. Men fueling the trucks must wear full face shields and special gloves. Exposure cause asphyxiation. The Federal Transit Commission warns that due to the complexity of the transport process human error and accidents are to be expected. Would you like to have an accident with a LNG truck? One such accident killed 22 people in Mexico City in May and caused havoc in the Boston area several years ago.

5. The preferred place to store LNG is in old salt mines like the ones around Seneca Lake. In Louisiana this practice has led to the creation of sinkholes. There have been other accidents around the country at storage facilities.

So… based on just this little bit of information: Do you think New York should allow LNG storage facilities and truck transport across the state?

Then go fill out as many comments as you can at http://www.thirtydaysoffrackingregs.com/oct6.php