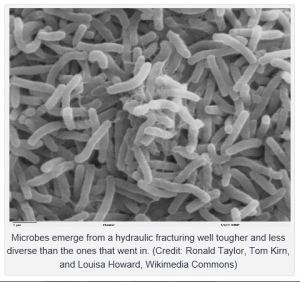 It makes perfect sense. If the water that is shot down a gas well to frack it contains microbes from the river or pond or stream if comes from, then naturally the flow back will contain microbes too. In fact, some of the ingredients added to the frack fluid is designed to kill them off. But an interesting thing happens. Microbes or germs as we know them are pretty clever organisms. They multiply and evolve rapidly. So…lots of microbes go down, and few come up but the ones that do come up are super strong. And while the gas companies know they are there, and now we know they are there, no one knows what effect they will have on the environment, livestock, or us.

A comment found on the American Geophysical Union Blog adds an additional worry.. Norm said on 4 December 2012 I was a fracker back in 1982. The microbes were one thing we looked at in the return fluid, even then, to get an idea of how the frack went. The flowback fluids are considered toxic and treated as such, they were in 82 and they are now. And that fluid does not bubble back, it comes back like a geyser-words matter. Hydrofracturing Brings Out Tough Bugs

So… if the fluid comes back full of bacteria and it geysers up in the air – those bacteria may be inhaled by workers and people living 500 feet from the well – (500 feet is the proposed set back for New York in the regulations proposed.)  I wonder if there are any regulations about that in the NYS proposal?

So if you are concerned about frack bacteria contaminating you and you children call Governor Cuomo and say NO FRACKING IN NEW YORK! 1-518-474-8390

Joan Koster writes historical fiction about forgotten women. She is currently working on a novel about abolition and woman's rights during the Civil War.
View all posts by joan koster →
This entry was posted in Environment. Bookmark the permalink.
Loading Comments...
%d bloggers like this: