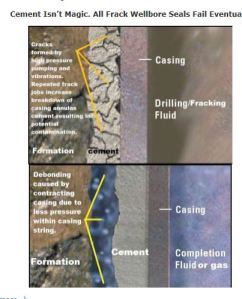 The flowback from fracked gas wells isn’t safe for children or other living things. We really didn’t need more proof of that did we? Well it seems we did. Penn State researchers have just completed a chemical analysis of the brine that comes back up the pipe after the fracking process. Not surprisingly it contains far more than the toxic chemicals the gas companies pump into the well in the first place.

The report, which will be published in Applied Geochemistry, analyzed the flowback that came up in the first 90 days of fracking for 72 wells in Pennsylvania’s Marcellus Shale (the same shale that is proposed to be drilled in New York).

Professor Emeritus Arthur Rose is quoted in the article Gas Well Flowback Matches Paleo Brines as saying that naturally occurring radioactive materials are being brought to the surface  from the Paleozoic era. This releases elements such as barium and radium that have been buried 8000 feet in the ground for millions of years. “Even if it’s diluted quite a bit, it’s still going to be above the drinking water limits,” Rose says. “There’s been very little research into this.”

So should we worry?  The article goes on the quote the study:  “Improper disposal of the flowback can lead to unsafe levels of these and other constituents in water, biota, and sediment from wells and streams.” So have the gas corporations who insist they are very concerned about our health put in stringent protections? Have our governments?

Well, we know this brine has been spread on roads in Ohio and other states, including New York. http://www.toxicstargeting.com/MarcellusShale/news/2012-02-08/area-official-questions-use-brine-roads. We also know that the brine has been poured untreated into major drinking water sources whether by accident or unscrupulous contractors, and we know that sewage treatment plants have “processed” flowback by dilution and dumped it into drinking water sources. Pennsylvania has set up new regulations to deal with this, but many are “grandfathered in.” The proposed regulations in New York say that this disposal will be regulated by occasional testing. The gas companies are touting reusing the fluid – but that just concentrates the toxins that are left in the well over time. The best disposal supposedly is to pump it into waste water wells. But that causes earthquakes. Science News 9/12.

However, all these disposal methods are for naught BECAUSE only 25% of the flowback fluid comes out on to the surface. The rest stays in the pipe. The pipe that goes down through the aquifer. The pipe that is made of steel surrounded by concrete. The pipe that will eventually fail if not in the first year (6%), or the 20th year (40%) or sometime in the distance future (100%).

In the end it all comes down to the pipe.