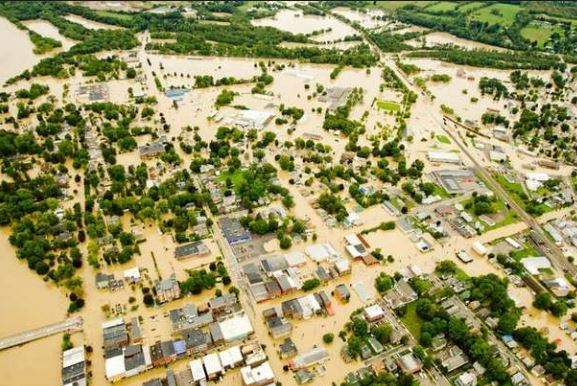 The following essay was written as an opinion piece in the Binghamton Press 4/3 by Pamela Williams.

Residents of the Southern Tier know the flood threat under which we live. My concern is over the lack of concerted effort on the part of local, state and federal government to ameliorate the potential effects of catastrophic flooding of the Susquehanna River. This threat is regional and cannot be effectively managed by individual municipalities that lack the funding, resources and expertise to address a hazard of this magnitude.

My fear is that the government’s predilection for the gas industry has overshadowed the desire to preserve the communities that exist in the Marcellus Shale region. As a resident, I feel that gas extraction and flood mitigation are incompatible given that efforts to pursue one go counter to efforts to pursue the other. For example, the establishment of well pads involves the denuding of hillsides as well as the invasion and possible contamination of wetlands. Flood mitigation requires the preservation of natural vegetation, wetlands and forests to deter runoff and absorb water.

In February 2010, Patriot Water LLC presented the Town of Owego with a proposal to build a frack wastewater treatment plant adjacent to a wetland and less than a mile from a residential area. The proposal was rejected due to a multitude of concerns including potential contamination in the event of a flood. Following the rejection, the Marcellus Drilling News said: “MDN recommends Patriot have a look at nearby Broome County, N.Y. There’s a couple of industrial parks close to Interstates 81 & 86 (N.Y. Route 17) in the Conklin and Kirkwood areas, and those locations have truck traffic all the time.” In September 2011, that entire area was inundated with floodwater.

The threat is regional and not restricted to wastewater. Landfills in Steuben and Chemung counties currently accept drill tailings that contain contaminants from gas wells in Pennsylvania.

As a lifetime resident of this region, I pray that those in authority will see past the short-term potential revenue promises of the gas industry and honor the desire of residents who wish to preserve their quality of life, property values and future health.

Most residents lack the means to leave the area and are defenseless in the face of industrial forces. Those same residents are powerless to control the catastrophic effects of nature. Only government has the resources to protect communities from such calamities. Those in positions of power need to decide and honestly make clear the manner in which the Southern Tier will be regarded going forward. Will it continue to be a collection of historically valuable, small-town American communities, or an industrial zone subject to the vagaries of an impersonal profit-motivated business with no tie to the community beyond a pipeline?

Recently, I saw a bumper sticker on the back of a pickup truck that read: “Wine ‘em and dine ‘em then pipeline ‘em.” This brief but pithy statement succinctly summarizes the general attitude of the gas industry.